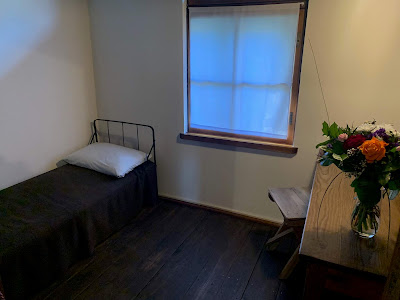 Today we traveled to the city of Niepokalanów which was founded by St. Maximillian Kolbe. He was a remarkable servant of God who had a tremendous devotion to the Blessed Virgin Mary and was a pioneer in using technology (radio and the printing press) to share the faith.

He died in the starvation bunker in the concentration camp of Auschwitz by offering to take the place of another man who was sentenced to death.

We celebrated Mass in the little wooden chapel and then headed over to the museum to learn more about this great saint.

After our trip to the museum we travelled to Plock where we met a sister of the Congregation of Our Lady of Mercy who gave us a tour of a new chapel they are constructing in honor of St. Faustina and the Divine Mercy message. St. Faustina received her first apparition in this town.

After our tour we headed to the small town of Uniejów where we had dinner and spent the night. The motel we are staying in is an old brewery they have converted into a motel. Some …
Read more
More posts